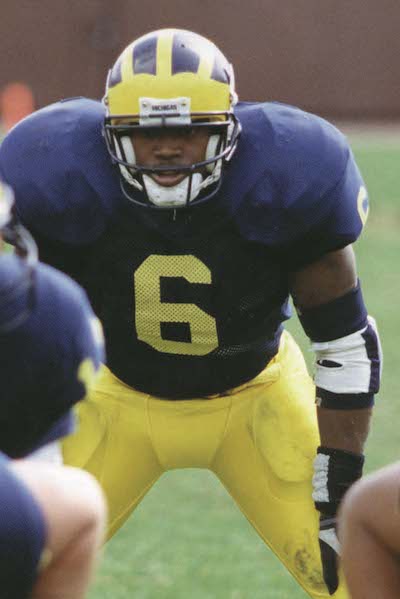 Photo courtesy of the University of Michigan
2013
Inkster, MI

Tyrone Wheatley was born in Inkster, Michigan and attended Dearborn Heights Robichaud High School where he excelled in both track and football. He won seven individual track and field state championships as well as one team championship in track and a football state championship. As successful as he was in track, he may have been even more successful in football as he has been described as the best football player in state history. Wheatley attended the University of Michigan and competed in both football and track and once again excelled in both sports. In football Wheatley was a three-time All-Big Ten player and a two-time Big Ten champion as well as the 1992 offensive player of the year and an earned All-American honors in the hurdles. He was drafted in the first round of the 1995 NFL draft by the New York Giants. Wheatley’s 10-year NFL career was split between the Giants and the Oakland Raiders, where he accumulated 4,962 yards on 1,270 carriers. Tyrone Wheatley was inducted into Michigan Sports Hall of Fame in 2013.